Every item on this page was chosen by a Woman's Day editor. We may earn commission on some of the items you choose to buy.

Downton Abbey: A New Era, the much-anticipated sequel to the 2019 Downton Abbey film, is an exciting addition to the beloved franchise. While the movie serves as a satisfying continuation of the story, full of moments sure to delight longtime fans of the show, you don't need to be a dedicated viewer to enjoy 2022's follow-up film.

With a thoroughly entertaining plot featuring dual storylines — one in which a Hollywood movie crew comes to Downton and the other taking place against the equally picturesque backdrop of the French Riviera — A New Era has a more accessible, lighthearted feel that may just draw in an entirely new audience. Add in the stunning 1920s fashion, plus English treasure Dame Maggie Smith delivering lines like: "Do I look as if I'd turn down a villa in the South of France?" and you've got a recipe for delicious cinematic escapism; something we could all use a heaping serving of these days.

To celebrate the film's release on digital and Collector's Edition DVD, Woman's Day interviewed Downton Abbey cast members Raquel Cassidy (Phyllis Baxter) and Jim Carter (Mr. Carson) at Wrest Park in the UK. The orangery at Wrest Park is actually featured in the movie when the family attend a party in the South of France. Other scenes were filmed on location in the South of France, and it was all woven together thanks to some real Hollywood movie magic!

Keep reading for the full interview with the stars — including behind-the-scenes secrets and the actors' thoughts on a possible Downton Abbey reboot or spinoff. And be sure to check out our chat with Downton Abbey: A New Era director, Simon Curtis, here.

WARNING: Spoilers ahead for Downton Abbey: A New Era. 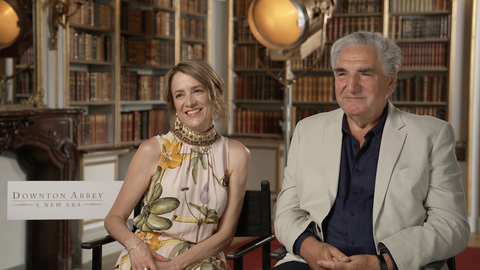 Woman's Day: Miss Baxter gets her happily ever after, and it is done in such a sweet way. How did you feel when you first read that scene in the script?

Raquel Cassidy: I loved it, I loved it. And what I didn't really realize because I hadn't had my costume fittings was quite how grand I would look and feel and how fun that would be. And what's lovely is she walks into the room, and she thinks he's feeling nervous because he's dressed up and we're going to do a film and she's completely misread the situation. And she's so excited about going into being in the film, and with him and for him that she can't quite...she has no idea what he's about to do. I don't think he knew more than about a few seconds prior to that. I love the fact that he realizes he can offer her a life and goes straight to find her and puts everything else on hold. And then there's this awful moment during it when she thinks, 'He's not actually going to ask me.' So I mean, it's incredible what Julian [Fellowes] managed to get into very few lines. And what the costume department did, and then the fact that it's heard and the family all take part in it. Really blessed moment well worth waiting for.

WD: The scenes in the South of France where Mr. Carson is sweating in his suit were so fun to watch. Were you actually miserable filming that day?

Jim Carter: I mean, shoot me if I could say I'm miserable filming in the South of France overlooking the Mediterranean. Sure, it was a little bit warm, but so what? I don't mind that at all. The South of France was a complete treat for us. For those people who stayed behind, it was pouring rain in England. But it was a joy. And the hot acting was acting.

WD: Was getting to travel your favorite part of filming this movie?

Raquel Cassidy: I love traveling anyway, and I love traveling for work, because then you end up working with a crew there and you experience a place in a different way, in a more full way. But having come from all of that lockdown, all of that time where really it's the same four walls, not even being able to see friends — this was extraordinary. It was such a gift.

Jim Carter: It really was. It was a real treat. And you were quite the tourist; you had plenty of time off so you were zipping about all over the place, weren't you?

RC: It was as if they'd said Brendan [Coyle, who plays Mr. Bates] and you can go on holiday and we'll put you up in five-star hotels and give you some diems to spend. The European Cup was on and we're both football fans, so we were watching those outside bars. It was great fun.

WD: And Jim, you had to work the whole time?

JC: It was no hardship at all, because I mean, that villa was beautiful. And I think you might have seen there was a swimming pool around the back, I was around the back with a couple of mates. It was lovely.

WD: How did you feel about where the film left Mr. Carson? Do you think the ending was open on purpose?

JC: That was lovely, that moment. I cherish those moments when I get to play scenes with Lady Mary as her sort of surrogate downstairs father. Those scenes are always a treat and the fact that she says she depends on him and it leaves the door open for him to come back to the house, should there ever be a moment when it's revived, who knows? Then I'm delighted about that, of course. Because Carson is part of the fabric of Downton Abbey, really.

WD: If there was going to be a revival or a spinoff, would you foresee it as a continuation of this story, or a future with different characters?

JC: I think in cold, hard reality it purely depends on the finances and if this makes enough money and then if the producers feel there are legs in more continuing or whether they jump back or whether they jump forward to when it's a health spa and [to Raquel], your granddaughter is running the spa.

JC: There's a statue of Carson in an alcove.

WD: Speaking of the future, do you have an envisioned future for Miss Baxter and Mr. Molesley?

RC: I think they probably will be incredibly happy. I think if he travels with his work, then she would go too, but I don't think she particularly would like to leave her job or her independence. But, you know, the occasional long holiday would be good. It's very difficult to know. If there were another film, then I think ultimately it's what happens to the family and how we get through it that matters. And being part of that is where the fun is at. But usually being with Mr. Molesley is quite fun as well.

Downton Abbey: A New Era is available to stream on Peacock and own on Digital now, and comes to Blu-Ray and DVD July 5.

Jamie Kravitz (she/her) is the Associate Editor at Woman’s Day, where she oversees the day-to-day digital elements of the Woman’s Day brand — covering anything and everything lifestyle related, including holidays, food, and products. Before joining Woman’s Day, she was digital editor at the Rachael Ray Show. Jamie has 5+ years of experience writing relationship, entertainment, home, and gifting content for publications including The Knot, Martha Stewart Weddings, Insider, and Elite Daily. She graduated from Emerson College with a BFA in Writing, Literature and Publishing and lives in Brooklyn with her cats, Lumos and Linus.

Netflix Is Stressed About the Sussexes' Docuseries

J.Lo and Ben "Cried to Each Other" During Wedding

Where to Watch and Stream GAC Family

'BBT' Fans Are Gasping Over Kaley Cuoco on TikTok